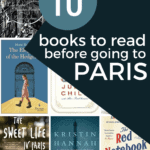 Doing a little reading (or even movie viewing) can be so inspiring before a trip.

Here are my recommendations for books to read before going to Paris.

I have read each of these books and can recommend them without reservation.

There are, of course, many more books available about Paris which I look forward to reading so that I can expand this list in the future.

This post includes affiliate links. If you make a purchase through one of these links, I may earn a small commission at no additional cost to you. As an Amazon Associate I earn from qualifying purchases. See disclaimer.

Books to read before your trip to Paris

The first thing you need to read before you create your Paris itinerary is a good quality guidebook.

And by that, I mean of course, a Rick Steves Paris guidebook.

If you’re planning to spend more than three days in Paris, I recommend getting the full guidebook.

For a short trip or stopover in Paris, the Pocket Paris Guidebook is a good option.

If you prefer a lower key guidebook to provide ideas for sites, accommodations and dining option then Rough Guides guidebooks might be more to your liking.

If you want nitty-gritty details on everything for your itinerary, you definitely want to go with Rick Steves.

The Sweet Life in Paris by David Lebovitz

If you only read one book (outside of a guidebook) before traveling to Paris I recommend The Sweet Life in Paris. It’s a delightful read.

I found myself nodding and hmmm-ing as I read stories of Lebovitz’s experiences in Paris. At one point I even gasped aloud, laughed and shouted out “That happened to me!”

No one else was in the room at the time, but that’s not the point.

Lebovitz doesn’t pull any punches about the things he dislikes about Paris…but don’t let that discourage you from going.

I think traveling to Paris with your eyes wide open will make you enjoy it more rather than find yourself unpleasantly surprised by any rudeness you might encounter.

(Psst. He doesn’t pull any punches about Americans either.)

The book includes some mouthwatering recipes (the author is a pastry chef), and he also offers his personal recommendations for Paris bakeries, chocolate shops, cheese shops and more.

*sigh* Now I really need to go back to Paris.

TAKE A PEEK INSIDE ON AMAZON

The Only Street in Paris by Elaine Sciolino

Elaine Sciolino’s The Only Street in Paris is a great study of a single historic street in Paris, the rue des Martyrs.

Sciolino was the New York Times Paris bureau chief, so she can definitely write.

Though not as fun and light-hearted a read as The Sweet Life in Paris, this is a book I strongly wish that I had read before going to Paris…and it made me hunger to return to Paris far more than any of the other books on this list.

CHECK OUT THIS AMAZON EDITOR’S PICK

My Life in France by Julia Child

When Julia Child arrived in Paris in 1948 with her husband Paul (who had been sent there by the U.S. State Department) she didn’t know anything about the culture or language

But soon was engaging in the culture…and as a result discovered her hidden talent for cooking.

Child’s willingness to try new things and stretch herself led directly to her changing the face of cooking in America.

Child’s autobiography was used as part of the basis for the screenplay for the film Julie & Julia.

A Moveable Feast by Ernest Hemingway

Published posthumously, A Moveable Feast is the memoir of young Ernest Hemingway’s time in Paris as a writer following World War I.

I picked up my copy at Shakespeare and Company on my trip to Paris.

I love how the cover has a photo of Hemingway standing out in front of the original Shakespeare and Company shop with the store’s founder Sylvia Beach.

While you’re in Paris, do stop by this iconic bookstore.

Though it’s not the original shop that Hemingway and James Joyce spent time in, it’s a great place to kick back and relax in Paris…and pick up a lovely literary souvenir.

CHECK IT OUT ON AMAZON

The Nightingale by Kristin Hannah

The Nightingale is the story of two French sisters with very different personalities—Vianne and Isabelle—as they struggle through World War II in France.

Vianne has to care for her daughter alone after her husband goes off to fight while Isabelle joins the Resistance.

I think I could confidently put The Nightingale on my list of the best novels I’ve ever read. Kristin Hannah is a great writer.

Once I got into this book (sometimes I read books slower at the beginning—no fault of the author), I literally couldn’t put it down.

So definitely read this one even if you’re not heading off to Paris.

CHECK OUT THIS #1 BESTSELLER ON AMAZON

The Invention of Hugo Cabret by Brian Selznick

Set in Paris in the 1930’s, The Invention of Hugo Cabret, tells the story of a young boy who lives in a train station after the death of his father.

He’s managed to hide out in the station undetected, but then runs afoul of the elderly man who runs the toy kiosk.

The Invention of Hugo Cabret is part novel, part graphic novel (the illustrations are used to continue telling the story rather than just illustrating what was read), and a thoroughly enjoyable read.

It’s not just for kids…trust me.

The Phantom of the Opera by Gaston Leroux

Gaston Leroux’s classic tale of The Phantom of the Opera should be on your Paris trip prep list.

You especially should read this if your Paris itinerary includes a tour of the Palais Garnier opera house, the setting for the book.

Our guided tour of the Palais Garnier was hubby’s favorite thing we did on our trip to Paris.

He loved it so much in fact that he went back later for a self-guided tour while I did some window shopping at Galeries Lafayette a block away.

The Elegance of the Hedgehog by Muriel Barbery

Beautifully written (and translated), The Elegance of the Hedgehog tells the story of 12-year-old Paloma (resident of an upscale Paris apartment building) who has decided she’s going to kill herself on her 13th birthday.

There is also Renee, the apartment building’s concierge who hides her intellectual side from the tenants.

Then they meet the building’s newest resident Ozu.

The Red Notebook by Antoine Laurain

The Red Notebook is a charming book that tells the story of bookseller Laurent who comes across a woman’s handbag in the street.

When the police are unable to take his report right away, Laurent decides to investigate the and track down the owner of the bag himself.

It’s an enjoyable read that reminded me a bit of the movie While You Were Sleeping.

Read More: The Best Books to Read on a Plane

Bonus! Here are some great movies to watch before a trip to Paris

This has been described as a love letter to Paris and I heartily agree. It’s one of my all-time favorite movies, and it should be required viewing before your trip to Paris.

And then also watch it when you get home so you can point at the screen and say “I’ve been there!”

Also try watching it after reading Hemingway’s A Moveable Feast.

It’s a heist movie set in Paris starring Peter O’Toole. Enough said. Oh, and Audrey Hepburn is also in it.

I prefer the book, but the film was enjoyable. Stars Asa Butterfield, Chloe Grace Moretz and Ben Kingsley.

And still more Audrey Hepburn in Paris! This Hitchcock-esque thriller (with a touch of 1930s screwball comedy) should be on your movie list even if you’re NOT going to Paris. Also stars Cary Grant.

What books (or movies) would you recommend that people read before traveling to Paris?

The Absolute Best Books to Read Before Going to Paris

Darcy Vierow is a travel planning expert with years of experience maximizing amazing travel on a less-than-average salary. Her insights have been published by Forbes and GOBankingRates.

I believe that travel should be fun and easy, not stressful and complicated.

I founded Plan Ready Go to provide travel planning tips, advice and tools especially for beginning travelers, anxious travelers (like me!) and for those who want to plan their own travel but simply don’t know where to start.

This website uses cookies to improve your experience while you navigate through the website. Out of these, the cookies that are categorized as necessary are stored on your browser as they are essential for the working of basic functionalities of the website. We also use third-party cookies that help us analyze and understand how you use this website. These cookies will be stored in your browser only with your consent. You also have the option to opt-out of these cookies. But opting out of some of these cookies may affect your browsing experience.
Necessary Always Enabled
Necessary cookies are absolutely essential for the website to function properly. This category only includes cookies that ensures basic functionalities and security features of the website. These cookies do not store any personal information.
Non-necessary
Any cookies that may not be particularly necessary for the website to function and is used specifically to collect user personal data via analytics, ads, other embedded contents are termed as non-necessary cookies. It is mandatory to procure user consent prior to running these cookies on your website.
SAVE & ACCEPT